This is my BCM325 BETA comments blog where I will provide some feedback and some helpful information and insight into three of my peers, to assist them in their individual Digital Artefacts.

The first blog I commented on was Jack Ridoutt’s.

Jack started his DA off wanting to talk about the future of CGI in films, but upon further consideration and assessing his audience and engagement levels he decided to scrap the idea and focus on the future of microtransactions, which I think is a much better direction to take his DA in since he has done a previous assignment about out as well as quite a personal passion in the gaming industry. The link I provided jack I believe will be a good guide to where the microtransaction industry is heading and whats the future of the business model. Being so prevalent in games today I don’t think they will be leaving anytime soon but they could evolve into new and sneaky ways of ultimately just gaining money out of people, so jacks final DA results and presentation will be interesting.

Second peer’s blog I commented on was Kendal Louis 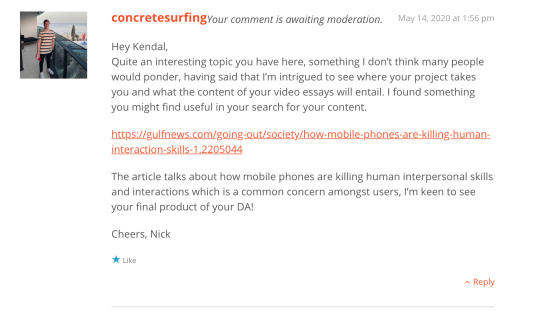 Kendal has quite a modern and interesting topic he is exploring the idea of connection to the internet in contrast to human connections and if technology and smartphones being able to make facetime calls are hindering or affecting humans who are primarily social creatures. I found a really good article that I believe Kendal will find incredibly useful, it discusses the impact that smartphones have and could have on the future of social interaction and interpersonal skills, that humans need in order to convey their ideas to other people. Using this info I believe it will give Kendal a bit more groundwork in order for him to generate content for the 3 visual essays he intends to do for his final DA.

Isabella has made some great progress with her digital artefact. Isabella’s project aims to look at the future of VR gaming. I sent a helpful link to an article that I believe will help expand her search and give her some specific details and areas of gaming that VR could potentially expand in, in the future, however, Isabella has received some really high-quality engagement on Reddit and through using a survey which she posted to her twitter to try and get the thoughts of some of the BCM students which is a great idea. This is promising feedback and if she continues to post and engage with these audiences she will be able to produce a really high-quality product come time for the DA submission.

All links for comments are hyperlinked within peer names.